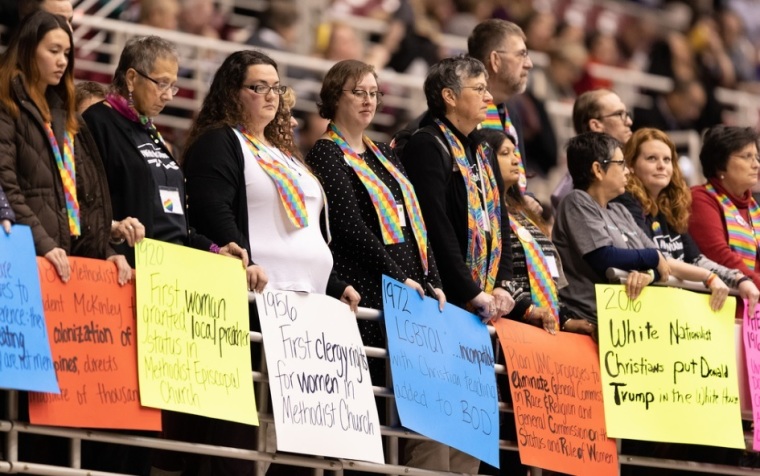 Supporters of full inclusion for LGBT persons in the life of The United Methodist Church demonstrate in the observer's area at the UMC special session of General Conference in St. Louis, Missouri on Monday, Feb. 25, 2019. | United Methodist News Service/Paul Jeffrey

A conservative United Methodist Church leader has stated his support for a proposal that allows UMC churches to leave the denomination over LGBT issues.

The Rev. Joseph F. DiPaolo, member of the Wesleyan Covenant Association Council, said that while he used to support staying with the UMC to “contend for the faith once delivered to the saints,” he stated that “I no longer believe that is possible.”

Recently, UMC leaders representing diverse views on the LGBT debate announced their support for a proposal called the “Protocol of Reconciliation and Grace through Separation.”

If approved, the protocol would allocate $25 million for conservative Methodists to vote to leave the UMC and create their own Church, tentatively labeled "traditionalist Methodist."

DiPaolo argued in a column Friday that the UMC is “irretrievably broken” due to the debate over homosexuality.

“Progressive clergy, churches and conferences stepped up their campaign of resistance, through defiance of our disciplinary covenant,” he wrote.

“Many bishops have been complicit, either through overt support, or by failing to exercise any meaningful accountability toward those who break their covenantal vows.”

He called the proposal for separation "the doorway" to "a vibrant, renewed and global Wesleyan movement.”

The UMC Book of Discipline currently states that homosexuality is “incompatible with Christian teaching” and prohibits clergy from blessing or being involved in same-sex marriages.

While the protocol remains a proposal, the measure has garnered great attention since many prominent church leaders across the theological spectrum have expressed support for it.

In addition to the WCA, the theologically liberal UMC advocacy group Reconciling Ministries Network is also backing the protocol.

“RMN supports efforts for broad reform in The United Methodist Church so that the Church can begin to repent of its anti-LGBTQ past and present and so that it can begin a new way of being the Church unpredicated on its U.S.-centric origins,” stated RMN earlier this month.

“In addition, the Church’s inflexible governance processes and structures may have proved adequate in an earlier era, but they are insufficient for the ministry needs of the world today.”

The UMC will hold its next General Conference, where legislative proposals regarding a possible schism will be entertained, in Minneapolis on May 5-15.