Nearly two-thirds of churches have plan for shooting attack, but divided on arming members: LifeWay 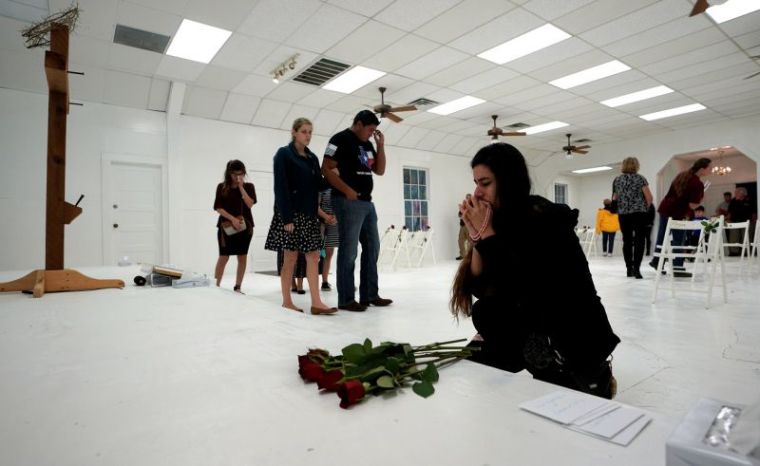 A woman prays in the First Baptist Church of Sutherland Springs as the church was opened to the public as a memorial to those killed, in Texas, November 12, 2017. | (Photo: Reuters)

Nearly two out of every three Protestant congregations in the United States have a plan in place for an active shooter incident but remain divided on whether to have armed members, according to a new LifeWay Research report.

The LifeWay report, released Tuesday, found that 62 percent of Protestant pastors said their churches had “an intentional plan for an active shooter.”

Overall, 80 percent of pastors responded that they have some kind of security measures in place for worship, while 18 percent reported no measures, and 2 percent said they were unsure.

Scott McConnell, executive director of LifeWay Research, said in a statement released Tuesday that he believed the findings showed that most pastors recognize that “Churches are some of the most common gatherings in any community, and that makes them targets.”

“While methods vary, most churches start with the resources they have to prepare for what they hope will never happen,” McConnell said.

“With planning, a church can be prepared without being distracted or paralyzed by the threat. Pastors are trying to balance two responsibilities — protect those on the inside, while being as welcoming as possible to those on the outside.”

LifeWay Research’s report comes amid many high-profile mass shootings at Christian churches and other houses of worship across the U.S. over the past few years.

On Dec. 29, 43-year-old Keith Thomas Kinnunen, opened fire at West Freeway Church of Christ in White Settlement, Texas, killing two people before he himself was shot by a security guard.

“The events at West Freeway Church of Christ put me in a position that I would hope no one would have to be in, but evil exists and I had to take out an active shooter in church,” Jack Wilson, the 71-year-old security guard who shot Kinnunen, said in a Facebook post.

“I’m thankful to GOD that I have been blessed with the ability and desire to serve him in the role of head of security at the church. I am very sad in the loss of two dear friends and brothers in CHRIST, but evil does exist in this world and I and other members are not going to allow evil to succeed.”

Last week, President Trump signed a bill authorizing $375 million in federal grants for the protection of houses of worship and other faith-based nonprofits.

"In the face of attacks on synagogues, mosques, and churches in our community ... we must work together to reject the monstrous evils of anti-Semitism and anti-religious bigotry," the president said.

"We are committed to building a nation where every community is secure, every family is safe, and every child can grow up in dignity and in peace."