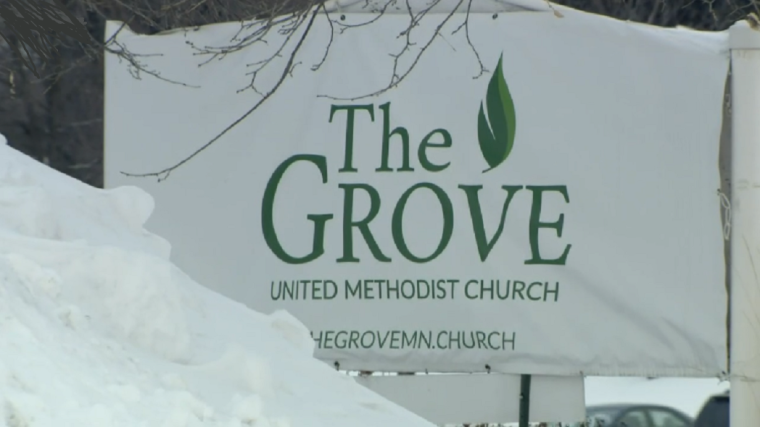 A sign at the Grove United Methodist Church in Minnesota. | Screenshot: KARE11

Leaders of a Minnesota church accused of trying to get rid of older adult members from one of their campuses in order to attract a younger crowd say the allegations are not true and “everybody is welcome.”

"Everybody is welcome. Our hope is they're not going anywhere. This is their church,” Lead Pastor Daniel Wetterstrom of the Grove United Methodist Church told KARE 11 of older adult members of the church’s Cottage Grove location, which has been struggling to attract members.

Wetterstrom explained that regular attendance at the Cottage Grove campus had been struggling with long-term viability with just 30 members. In consultation with other church leaders, a decision was taken to employ a strategy known as the "relaunch," which had been used by other struggling Methodist churches in Minnesota with positive results.

"We, for over the past decade, have struggled," Wetterstrom said. "Struggled to grow. Struggled to reach people."

Under the relaunch, the Cottage Grove location is expected to close in June temporarily before reopening in December with a young new pastor named Jeremy Peters to help attract a younger crowd and create an intergenerational church.

That’s not the message longtime member and older adult Bill Gackstetter said he and other older members received. He said he and other members were asked to go worship at The Grove's second Woodbury location, if they would like, for 15 to 18 months after the relaunch as the church transitioned to new leadership.

"It made me feel sick that they would treat other Methodists like that," Gackstetter told KARE11.

In a letter signed by Wetterstrom, Kelly Lamon, associate pastor, and Betsy Stites, core team chair, the leaders further stated their intent for the offended members.

“The worshippers at Cottage Grove are beloved members of our church family; their presence and contributions are part of our identity. The Cottage Grove members have been invited to serve on a transition team to identify the traditions and values that are important to them and to explore options during and after the relaunch,” the leaders said.

“We are working to connect them to the existing worship services in Woodbury or help them continue as a group at a different time and/or location after the building closes to prepare for relaunch. We recognize that people may have a range of feelings about the Planting Project. We acknowledge and honor these feelings, and we seek to be a safe space where all these emotions are welcomed and affirmed,” they continued.

“Finally and most importantly, we will continue to remind you that you are precious and beloved children of God. We lament that this media attention has been hurtful to worshippers at both campuses. We grieve the damage this story has caused. We are committed to working through this time of transition in relationship with you all. We invite you to pray for your church and to support one another during this difficult time.”