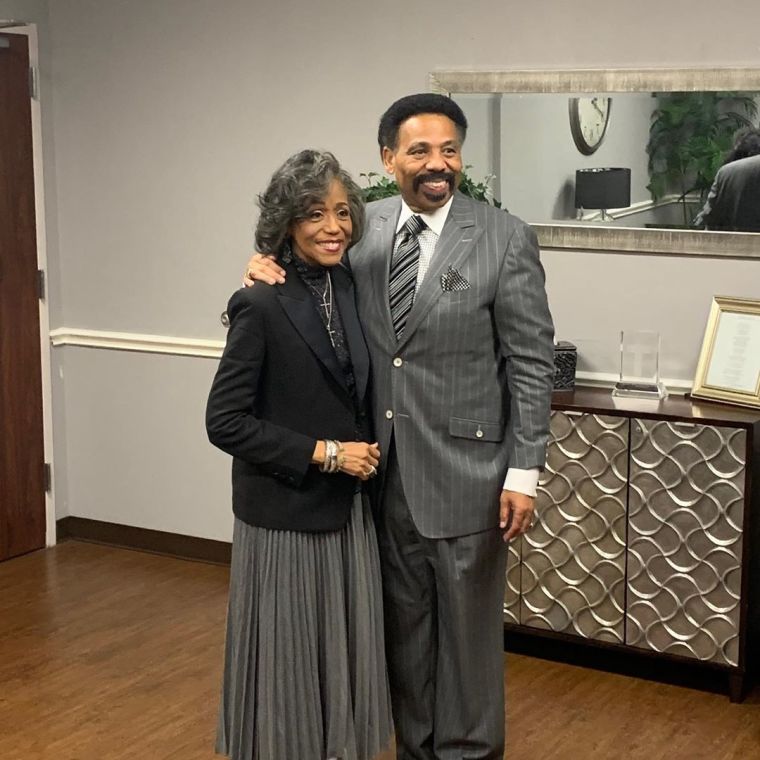 Tony Evans revealed that his late wife Lois Evans “saw a glimpse” of Heaven before her passing and asked supporters to continue praying for him as he grieves her death.

“So many of you prayed for my wife, so many of you sent cards, so many of you gave encouraging words," Evans, who is the senior pastor at the Oak Cliff Fellowship Church in Dallas, Texas, said in a recent Instagram video.

Lois Evans passed away on Dec. 30 at the age of 70 after battling a rare form of cancer.

“It was a long journey,” Evans admitted. “While God didn’t give us exactly what we wanted, which was total healing of course, He did extend her life beyond what doctors said she had given the rare nature of this particular disease.”

“It was a difficult season and life does hit us that way sometimes,” he acknowledged. “But I just want you to know what your prayers are doing for me now: They are keeping me strong. I still trust God. I don’t always understand Him, but I do trust Him.”

“I choose to believe, even with the loss of Sister Evans, my precious wife of 49 and a half years, that He’s still good, He still knows what He’s doing ... He’s still the God of my salvation and I will rejoice in Him. I want you to rejoice in Him too. And I want you to keep trusting and keep praying to Him.”

“As things got closer, she asked me to let her go because it was clear that it didn’t look like God was going to bring about the healing we wanted on this side,” he said.

“As she got closer to Heaven, she said, ‘They want to give me an award. They’re just waiting to play the song.’ She got a little glimpse of forever and even then was supported by your prayers."

The founder of the Urban Alternative asked supporters to pray "for me, our family, and our ministry, that the Word of God would go forth stronger than ever.”

“When she got sick, she said to me, ‘Don’t let my illness stop the Word of God from going forth,’” Evans said of his wife. “That shows you what kind of woman she was, what kind of wife I had.”

During her memorial service, the Evans’ daughter, Priscilla Shirer, elaborated on her mother’s supernatural experience.

“She said, ‘They’re trying to give me an award, but they can’t find the right song,’” she recalled. “She said that over the course of two or three days, intermittently. About a week later, Dad and I were in the room and we started playing worship songs. I picked a random worship song off my playlist, and as it started to play, she opened her eyes and said, ‘That’s the song.’”

The Evans’ son, Jonathan Evans, then played the song their mother identified, titled “The Victory Belongs to Jesus.”

Previously, Tony Evans revealed his wife glimpsed the spirit realm on several occasions in the days leading up to her death.

"Simultaneous to the time of her departure were things taking place that were letting us know she was dealing with something outside of the earth's realm," he said at her memorial service.

"On another occasion, she said, 'My father. There's my father.' And there was no one in the room physically. She was seeing something as the time of her departure got closer."

Evans said she also appeared to get a message from beyond this earth about the time of her departure.

"She said, 'Two days, two days, take me up.' Two and a half days later she was gone. She heard something, she saw something as the time of her departure got nearer, like Stephen in Acts chapter 7 who, when he was being stoned to death, he says he saw heaven opened and Jesus standing on the right hand of the Father giving him a standing ovation."

"One of the things that I've observed in life and in scripture is that when people walk with God and He doesn't take them suddenly, He will give them a glimpse of Heaven while they're still transitioning from earth. He will let them know, not only that it's time, but it's OK."