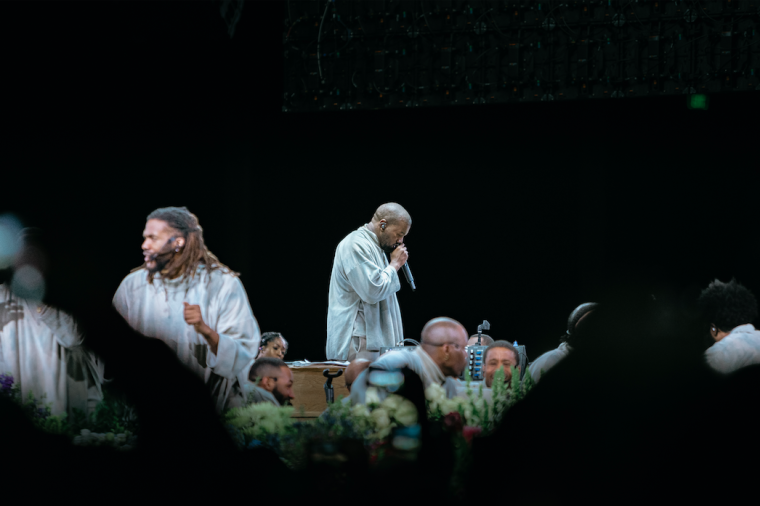 PIGEON FORGE, Tenn. — Kanye West shared how Jesus radically changed his life and saved him from the devil while performing along with his Sunday Service choir at a youth conference where hundreds of students dedicated their lives to Christ.

“I believe Jesus died for my sins. There was a time when the devil had me,” West testified before the 12,400 students gathered for the Strength to Stand Conference on Sunday.

“Do you know the good news? Jesus can save a wretch like me,” he continued as the 135-member Sunday Service choir around him sang the words, “I stretch my hands to you/Father I stretch.”

“When I don’t know what to do, I can still stretch my hands,” he said.

Surrounded by 38,000 flowers, West and the choir put on an unforgettable service at the East Tennessee conference, complete with rap, gospel-infused songs, and traditional hymns.

By wearing the same gray outfit as the choir, West took the focus off himself. With little stage presence, the hip hop artist stayed within the choir throughout the majority of the service and spoke few words as he performed. The goal of the Sunday Service was clear: God, and not Kanye, was going to be glorified.

And glorified He was. 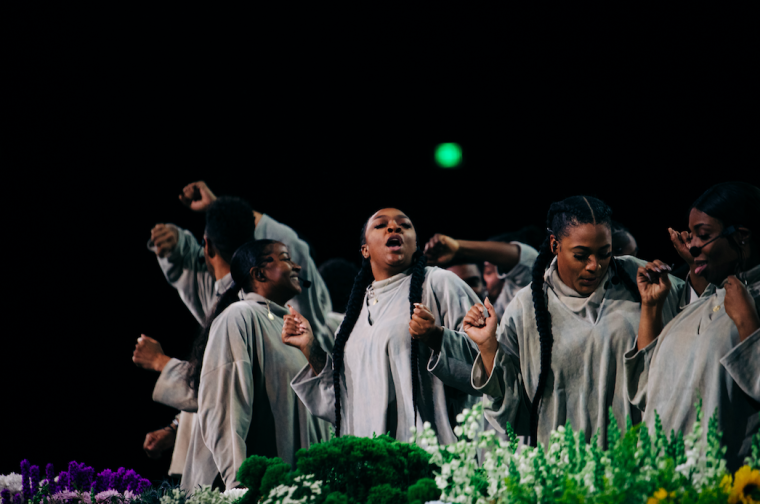 West powerfully spoke the lyrics of “Jesus Is King” tracks “Selah,” “Follow God,” and the fan-favorite “Closed on Sunday.” During the service, the Sunday Service Choir belted out songs including “Ultralight Beam,” “Every Hour” and “Revelation 19:1,” along with traditional hymns including “How Great Thou Art” and “Jesus Loves Me.”

“Hallelujah, He is wonderful!” the choir sang as students raised their hands in worship, reflecting the communal spirit of the church.

“The Father is saying to his son, ‘If you'll come back, I'm so glad you're back. I love you,’” Tyson said. “Are you hearing me this morning? If you come back to the Father, He runs after you. He loves you. He wants to embrace you. He wants to give you a holy kiss; a kiss of mercy, a kiss of love, a kiss of acceptance. It's from the Father and it's for you. It's forgiveness for you.”

Tyson concluded his message with an altar call, during which over 200 students dedicated their lives to Christ, according to event coordinators.

Following Tyson’s message, the Sunday Service Choir performed the Coldplay song “Fix You,” altered to include the lines: “Christ will guide you home/and revive your soul/Christ is here to fix you.”

West closed the Sunday Service with a powerful rendition of his 2005 hit, “Jesus Walks,” before silently filing out of the venue behind choir members.

Scott Dawson and his organization, the Scott Dawson Evangelistic Association, has held Strength to Stand in Pigeon Forge since 1994. In total, 17,000 students took part in the three-day conference — the largest gathering to date.

“We're just humbled that we were able, through a divine orchestration, to deliver a cultural icon like Kanye West and the transformational power of the Gospel,” Dawson said. “We believe this is part of God’s divine appointment for a movement to go across our country. We’re in awe: You plan a conference, and all the sudden God is developing a movement.”

Dawson said that the humility shown by West and his team has been “refreshing but also convicting to those of us who are in full-time ministry.”

“If some of our leaders would show that type of humility, maybe we'd start seeing revival across our country,” he said. “What you're seeing is that the Gospel never changes, but the Gospel can penetrate any culture. And I think what's happened is a lot of times we tried to retreat when in Scripture it always tells us to go forward. I think it may be Christianity going into pop culture instead of pop culture coming into Christianity.” 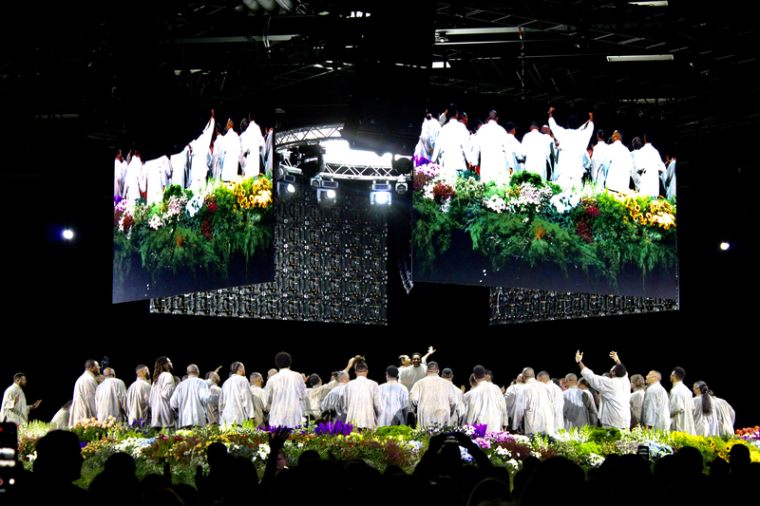 To Christians who are skeptical of West’s conversion, Dawson said, “You need to understand the transformational power of Christ in a man's life. ... Anyone who reads the New Testament understands the power of Jesus.”

He pointed to the Apostle Paul, who was famously thrown off his track of persecuting Christians after an encounter with Jesus.

Geared for students from middle school to college-age, the conference seeks “to go beyond the surface of casual Christianity and bring them into a lifetime commitment to Jesus Christ,” Dawson told CP.

Other headliners at the Strength to Stand conference included Hillsong Young & Free, Lecrae, and Jonathan Edwards. Dawson told CP that the first night of the event, over 400 students dedicated their lives to Christ.

“We not doing this for an experience, we're doing this for eternity,” he told CP. “There's an atmosphere that's conducive for the Holy Spirit to speak to a young person's life and for them to see someone that may have experienced the power of Christ.“

Dawson added, “Ultimately, I hope to see them to walk out of here and take Jesus with them.”